Chamber of Mines of Democratic Republic of Congo (DRC)

President of the Chamber of the Mines of the DRC. Honorary Minister for the Mines and Hydrocarbons (2001-2002), he drafted the new mining code that came into force and is currently used in the DRC. He is a board member of the Accesses Bank of the DRC and a member of the Steering Committee of the EITI/ RD, representing the private mining companies.

He graduated from the Universite Libre of Brussels in 1986 where he did a degree in mining engineering. Some of his career highlights include:

In 2001 he was nominated as Minister of the Mines and Hydrocarbons in the first government of President Joseph Kabila. He left the government at the end of 2002, after which he started consulting for BICOTIM Sprl.

In 2005 he started working as a Special Advisor in the DRC Copper and Cobalt Project (DCP), before becoming Chairman. With the merger of DCP and KCC (Kamoto Copper Company) in 2008, he is appointed Managing Director until July 2009, before becoming the Executive Chairman of the board of the new merged entity.

In May 2012 he left KCC to run a new company, Congo Railway Solutions, as Managing Director.

Simon Tuma Waku
Email: This email address is being protected from spambots. You need JavaScript enabled to view it.
Tel: +243 817 007 173
Website: http://chambredesminesrdc.com/ 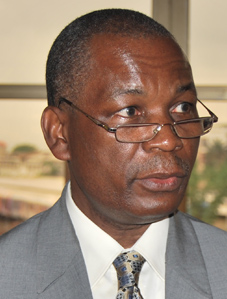